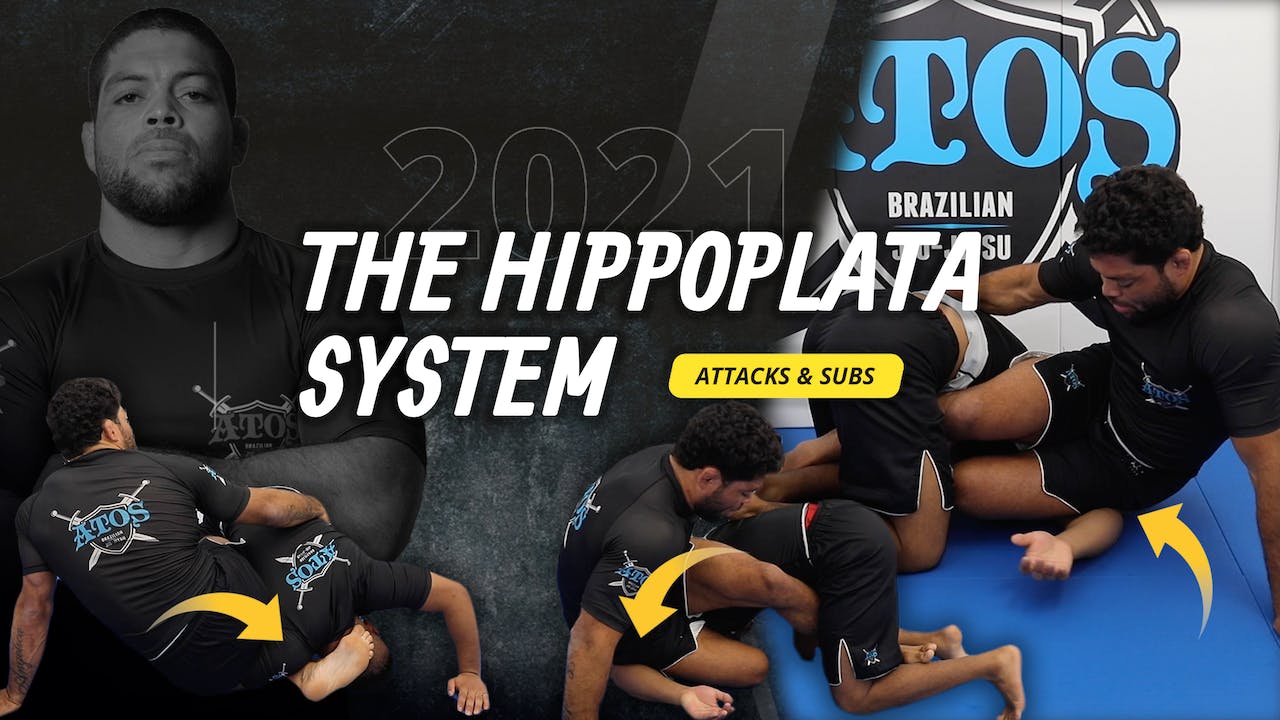 Learn and use the Hippoplata to escape from pressure passing directly to counter attacks submissions like the twister, the calf slice, the reverse omoplata, heel hooks, and more.

This Hippoplata uses shoulder lock pressure and can be used to counter over under passes, double under passes, and attacks from the top when you drive your opponent into bad spots.

Andre Galvao reveals the secrets from one of the techniques created and developed by him. Galvao shows super effective ways to attack, submit and counter attacks for the jiu-jitsu practitioner. In addition to several high-percentage submissions: chokes, arm locks, crucifix, and many other variations, Galvao also shares some of the basic concepts that will help you execute them easier, as well as some drills to help with your setups and body movement!

Featuring 12 individual lessons, consisting of more than 4 hours of content!

"If you train Jiu-Jitsu regularly, you have a game that's starting to take shape. Maybe a deadly De La Riva guard, or crushing Kneecut pressure, or maybe it's getting tapped seven times in a row until your opponent is utterly exhausted, before you rise like a phoenix from the ashes and destroy them.

But one element might be missing in your guard; your counter-attacks when the opponent tries to smash you with a simple shoulder lock using the weight of your hip.

"For the past several years, I've been working and distilling this super effective counter-attack guard system my guard techniques down into what I feel is the most effective form to be able to play guard well: ATTACKING & COUNTER ATTACKING CAUSE THE BEST DEFENSE IS THE ATTACK. You will be surprised how easy you will finish and surprise your opponents.

And now I want to share some of my guard secrets with you!"

After you buy this course, you're going to see over 12 videos of attacks, counter-attacks, combinations, and in-depth explanations of the mechanics of the most effective attacks, submissions, and sweeps. You're going to build a solid understanding and foundation to base your Hippoplata game around, all laid out in an easy-to-understand and digestible format."

Stop waiting, improve your game forever now for only $127.00 USD!

He received his black belt from Luis “Careca” Dagmar, having also worked extensively with Fernando Terere. Galvao is also a former mixed martial artist, with an MMA record of 5-2-0, before he retired to lead the Atos Jiu-Jitsu Academy's Headquarters in San Diego, California.

THIS INSTRUCTIONAL IS FULL OF GALVAO'S GUARD SECRETS. LEARN STEP-BY-STEP AND BE ABLE TO SUBMIT YOUR OPPONENTS IN TRAINING OR COMPETITION. CHANGE YOUR GAME FOREVER AND GET BETTER FASTER!

Downloadable videos - 100%! You can download this course and watch it OFFLINE on your favorite devices - Smart Phones, Apple TV, Roku, and Fire TV - download our app now!
*ALL CONTENT HAS English & Portuguese Subtitles!

For All Levels - This master class is for beginners or advanced fighters, the course will change your game FOREVER.